They say the egg is nature’s perfect food. A thing of beauty, chock full of vitamins and minerals and love and happiness.

It follows that a logical next step would be something along the lines of the The Egg Shop, a darling little establishment in SoHo with white walls, cozy booths and eggs coming out of everyone’s ears.

I flirted with the idea of ordering the Egghop B.E.C., a poached egg served atop avocado toast with cheese and savory jam and pickled jalapeño; or the El Camino, a bowl of pork carnitas over fried tortilla and eggs which my fellow Ashcraft, Emily, strongly vouched for.

Somehow I ended up ordering a thing called The Spandex. A deep – but not too deep – bowl of quinoa, kale, pickled carrots, and avocado topped with a shiny poached egg.

The guy sitting beside us slumped over his table, staring at a plate of toast oozing egg yolk and melted cheddar.

“And I’m on a diet,” he said defeatedly, more at the general vicinity than to his date.

I’m just going to say it: I don’t like quinoa. I think it’s an overly grainy whole grain. You’d have to brush your teeth with a loofah to get all the seeds out. However, the smart guys and gals at the Egg Shop seasoned the potting soil I mean quinoa with miso-tahini flavor, and called it Spandex. And it was delicious, with a perfectly poached golden egg yolk seeping down into it like a ray of juicy sunshine poring through stems of kale and carrots. 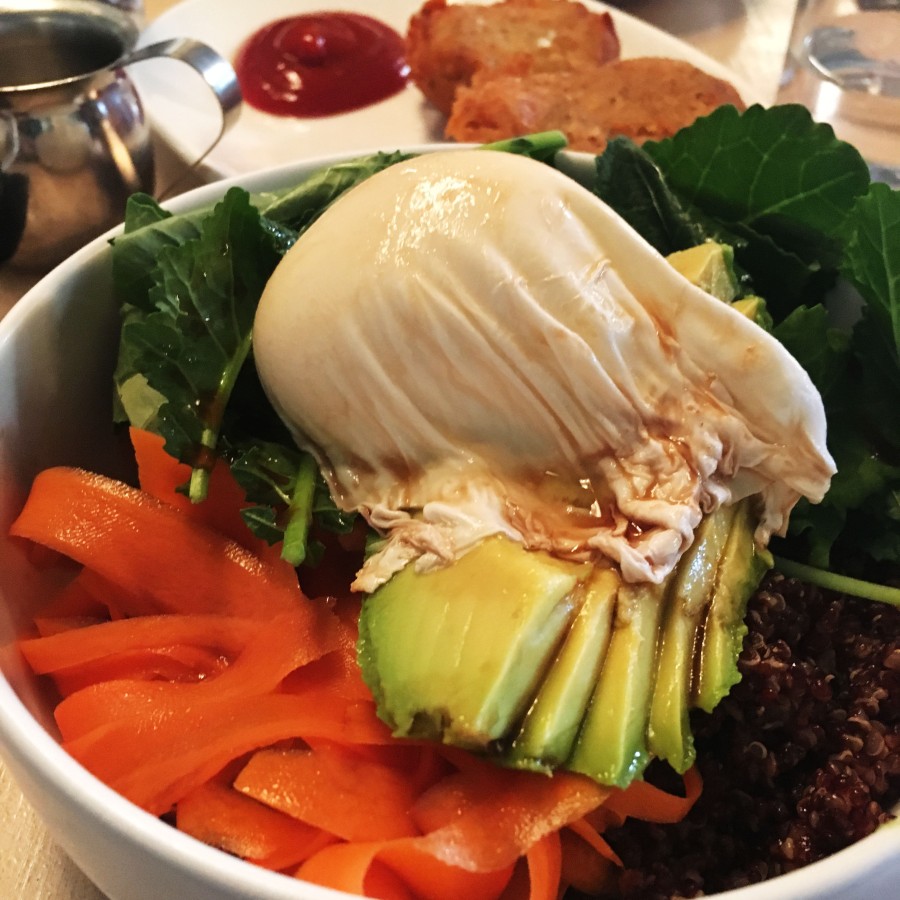 The mint and lemon infused tap water made up for the slight weakness in the coffee department. Then again, I drink from the fountain of a French press daily, which as a reminder to us all, is an old fashioned device that brews thicker, stronger coffee than a pot ever could.

I felt full, nourished, and satisfied by my indoor plants. Maybe I wouldn’t have without watching my cousin Emily nosh on avocado toast, or without our diet-wrecking friend next to us; or without our split order of hash browns which were more like thick, crispy-on-the-outside potato pancakes. Delicious, a little peppery with some paprika sprinkled in and served with a chipotle-spiced ketchup, a well-timed poke rather than a kick to my Texan taste buds.

We walked out and stopped just down the street for a cup of coffee. It was Emily’s first cup of the day. And my third. Ah – that’s what was missing.

One thought on “Brunch Pants are for The Egg Shop NYC”